How can we help you today?

How do I move my music from another distributor to Ditto?

So you want to leave your current distributor and move your music to Ditto? We don't blame you!

You can move your entire back catalog of releases to Ditto without losing any of your streams or playlists adds. Here's how:

Start by signing up for a Ditto Music account. Then, upload all of your releases to Ditto Music before taking them down from your current distributor.

Here are the really important parts:

- Upload the "Ditto versions” of your release as similar as possible to original versions including the exact same:

- Upload & deliver the “Ditto versions” of your releases before the original versions have been taken down, so they co-exist in Spotify’s backend system for at least 48 hours. We recommend having them both live on Spotify at the same time so you can see the two versions with identical stream counts.

- After you see the stream counts have merged, submit a takedown request to your original distributor.

To determine if the stream counts have merged, look at the release on Spotify a day or two after delivery of the Ditto version. In the bottom right corner under the last track, there will be a button saying “1 More Release” (take a look at the image below).

If you click this button, you should see the other identical version of the release where you can compare stream counts. 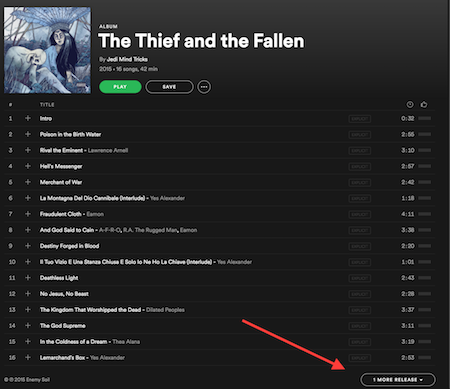 Make sure to check every track on the release. If you see two versions of the release stacked on top of each other with different stream counts, it's likely there was an issue with ISRC, audio files or naming, but this can usually be rectified with an update.

Once you're sure all stream counts are identical, send a takedown request to your original distributor.

All playlists inclusions should also be maintained if you follow these steps for a successful merger.

For a little more info, here's a discussion of this on Spotify’s forums.

Did you find it helpful? Yes No

Send feedback
Sorry we couldn't be helpful. Help us improve this article with your feedback.